The Story of Burt and Barbara 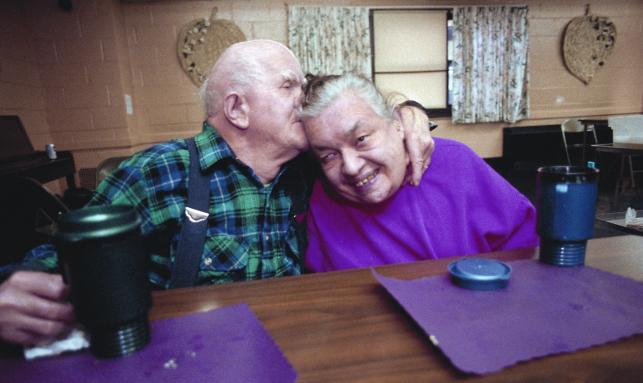 Since opening our first Community Residence program on Staten Island in 1977, Volunteers of America-Greater New York has been committed to helping people with intellectual and physical disabilities.

Our Residential Services program on Staten Island helps people with these disabilities live safely and as independently as possible, in apartments of their own, integrated into their communities. Depending on their needs, some individuals receive 24-hour supportive services, and others get daily visits from staff.  The services we provide include protective oversight, vocational and educational programs, and advocacy.

Two of the people in our care, Burt and Barbara, were residents of Willowbrook State School, an institution that until the 1980s housed more than 5,000 residents. A 1972 exposé by Geraldo Rivera revealed the inhumane conditions at the school, including physical and sexual abuse, and showed residents left unfed, unwashed and unattended for days on end.

As Willowbrook slowly dismantled, some residents fell through the cracks and ended up homeless. Others, such as Burt and Barbara, were transferred to smaller residences, including those run by Volunteers of America.

In 1979, they met on a bus on the way to a sheltered workshop, and fell in love. Barbara says that it was love at first sight.

It took several years of advocacy by Volunteers of America and other community groups for Burt and Barbara to finally get their license to wed, which they did in 1985. In 2010, we commemorated their 25th wedding anniversary with a special party where friends, family and staff – some of whom have spent more than 17 years by the couple’s side – gathered to share in their joy.

Now retired, the couple continues to live in their own apartment, rising early each day to spend time with friends at their neighborhood senior citizen center. For individuals like Burt and Barbara, Volunteers of America has afforded them the opportunity to gain their much deserved independence and to enjoy a life of dignity, richness, and, in their case, love.