Paying it Forward: How One Volunteer's Past Inspired Her to Give 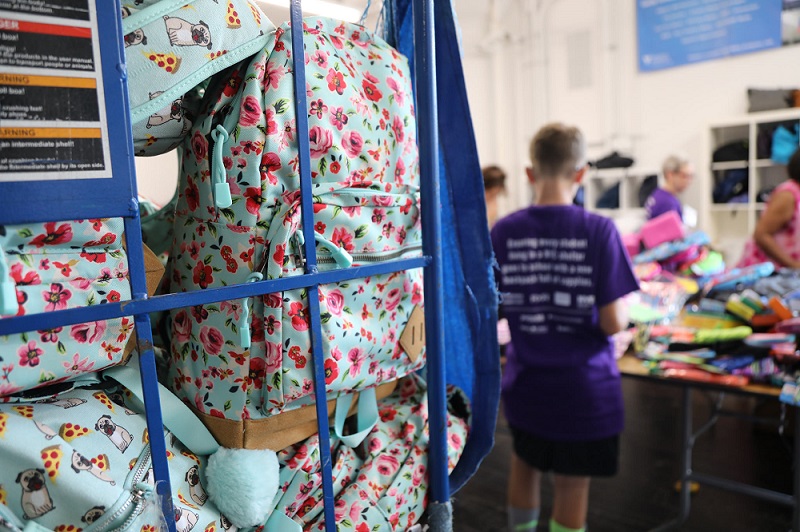 When Giselle*, learned about Operation Backpack® through an e-blast sent out by her company, she was instantly excited to sign up. “It was something I would have wanted when I was younger and in that situation,” she says, reflecting on why she felt so motivated to help. Giselle says she was instantly moved by the city-wide initiative, and how the community, including her own organization and colleagues, were so willing to dedicate their time and money toward ensuring that children who are homeless go back to school with the supplies they need.

Giselle could empathize with the backpack recipients because she’d had a similar experience when she was 10 years old. She and her two siblings were first generation and grew up in Queens. Her parents had emigrated from Egypt. One day on the way to school, instead of going to class, Giselle’s mother led the family to a homeless shelter. They eventually transitioned into a domestic violence shelter in Brooklyn, where they spent nearly a year.

“I was lucky because I felt safe there. It was clean. It didn’t feel like I was homeless, but I couldn’t tell people where I lived.” As is the case with many families in need, Giselle’s mother wanted her children’s lives to be as normal as possible, so she kept them in the same school. Her mother commuted to work, so until they could arrange for a bus to pick them up in Brooklyn, the whole family had to wake up at 4:30 a.m. to be dropped off at school. Typically, they wouldn’t make it back to do homework until 7 p.m.

On top of everything, Giselle was also supposed to be applying for middle schools at the time. “My teachers asked me at the end of the year why I didn’t apply to any middle schools. On the application I had to put my home address, and I wasn’t sure what to write. It was hard. Maybe if I had school supplies I would have applied.”

After Giselle and her family moved out of the shelter, she went on to high school in Manhattan and then college at NYU, where she graduated with a degree in Economics. Now that she’s employed with one of our Operation Backpack® partners, she says she’s in a position to give back.

In early August, she volunteered at Operation Backpack® Sort Week with her co-workers, stuffing pencil cases for children who are about the same age as she was when she experienced homelessness. She tried to put herself in their shoes and think about how excited they would be to find the supplies in their new backpacks.

“When I was in the shelter, I didn’t really think beyond being there,” Giselle says. “If I could tell these children something, it would be that there’s another time coming when you won’t be in a shelter. You should take advantage of your new school supplies. It’s how I was able to get out of that situation. Focus your energy on the future; supplies can help you do that.”